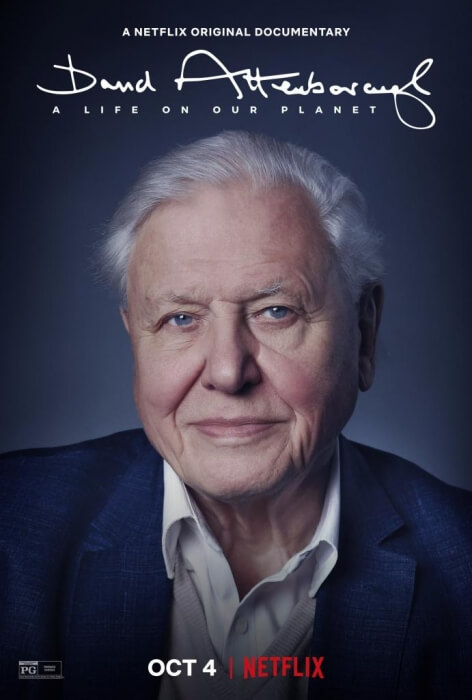 David Attenborough – A Life On Our Planet

Although I’d been fortunate enough to work on previous productions narrated by Sir David Attenborough, the invitation to write the music for the story of his remarkable life was a particular honour, albeit a daunting one. To find the right musical tone for what Sir David refers to as his “witness statement”, a film that shows mankind’s impact on the natural world through the eyes of the man who has experienced so much and shared it with us all for so many years, was an exciting but nerve-racking prospect.
The key thing I wanted to do was to write a score that Sir David himself may enjoy. Having been told of his extensive collection of and interest in chamber music, I decided to write for a small string ensemble with assorted soloists, a marked difference in sound from the more large scale orchestral work I had done on natural history productions such as Our Planet and The Hunt. The more intimate writing enabled me to follow the film’s journey through Sir David’s early travels to his realisation of the huge dangers facing the planet. From youthful adventures through to the sadness of the present day, and then looking forward with a more optimistic blueprint for the future, the film invited the music to accompany Sir David’s life every step of the way. We recorded the score over two days in December 2019 and were honoured to be visited by the man himself, who spoke to the musicians about our shared mission, and inspired them to performances that I was really proud to witness.
Everyone involved in the project is proud to have been a part of it, and hope that it can be seen as far and wide as possible in spreading Sir David’s crucial message. The two days in the studio recording the score were some of the most moving times I’ve had in music, and I’m very grateful for the opportunity to have been involved with the film.
Go to Top
{{list.tracks[currentTrack].track_title}}{{list.tracks[currentTrack].track_artist? list.artist_separator :''}}{{list.tracks[currentTrack].track_artist}}
{{list.tracks[currentTrack].album_title}}
{{ currentTime }}
{{ totalTime }}